Not So “Proud Mary?” Mary J. Blige’s (@maryjblige) Reveal The Ups & DOWNS of Her Finances!

This last year has definitely been a rough one for singer, Mary J. Blige. Her divorce from husband/manager Kendu Isaacs has only become more bitter by the day. Now, her divorce papers are revealing her financial situation–and it does NOT look good! 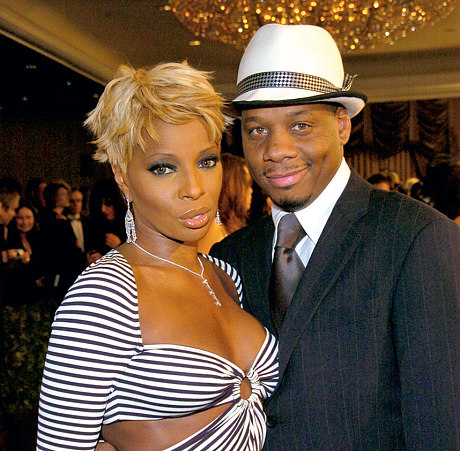 The R&B singer, who is in the midst of a bitter legal separation with Martin ‘Kendu’ Isaacs, filed an Income and Expense Declaration in a Los Angeles court on August 8, after she was given a temporary order to pay him $30,000 a month.

Blige, 46, filed for divorce from Isaacs in July last year, citing irreconcilable differences after nearly 13 years of marriage. Isaacs later demanded spousal support claiming the star left him with ‘no source of income.’

Documents obtained exclusively by DailyMail.com, reveal the star earns $326,930 a month – with royalties and earnings from her production company being her main source of cash.

But the paperwork also showed Blige is in hock to Uncle Sam as she owes ‘unpaid back taxes of approximately $6.5 million for the years 2008 through 2016.’

The singer made a note of her debt after reporting a change in income due to a ‘large reduction in my royalties’ over the past year.

Expense records show she currently pays $14,000 a month for her Los Angeles rental and $2,340 for her two Mercedes-Benz. 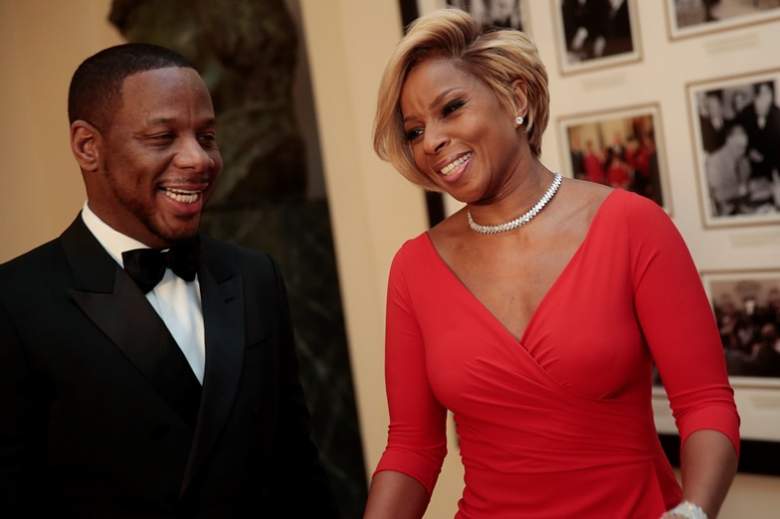 Her monthly expenses also include mortgage interest, insurance, and real estate taxes for her three homes across New York and New Jersey.

In 2015, Blige put her eight-bedroom, ten-bathroom, Saddle River, New Jersey mansion up for sale, but it remains on the market.

It was listed as ‘un-rentable’ along with her property in Cresskill which has been boarded up by the city and is in a state of ‘disrepair.’

Isaacs, on the other hand, who formerly served as Blige’s manager, had a gross monthly income of $43,977 based on commissions.

Following Blige’s divorce filing, he claimed his estranged wife’s decision to fire him has left him with ‘no source of income.’

He wanted the Grammy winning songstress to help him pay for expensive meals out, a housekeeper and to generally help him maintain his ‘lavish lifestyle.’

According to his court papers Isaacs specifically wanted Blige to cover the majority of the $116,250 he spends per month. He also wants her to cough up $5,000 a month to support his parents and $4,971 a month in support for his two children from a past relationship.

Blige had been fighting against his request, accusing him of blowing money on his ‘girlfriend’ and claiming it as business expenses.

Earlier reports claim Isaacs had an affair with singer Starshell, who is Blige’s protege.

In court documents, she accused him of taking $420,000 and using it for what he called ‘travel charges,’ over a two-year period insisting the money was not spent on business-related activities or on activities that involved her.

In a note to her ‘Gross Cash Flow Available for Support’ Blige’s accountant states: ‘However, based on the summary of travel expenses prepared by [Chief Financial Officers of ASCOT Travel Services], Martin Isaacs incurred $419,299 of travel expenses over the period of March 2014 through August 2016 which were deducted as business expenses.

‘Accordingly, we added these amounts back to taxable income since they are non recurring.’

Previously TMZ had reported that Blige was ‘outraged’ over payment requests from her husband following their split, stating: ‘I am not responsible for supporting [Martin’s] parents and his children from another relationship which he lists as ongoing monthly expenses.’

Court papers also show the recording artist claimed the former couple’s estate is ‘underwater’ to the tune of $10 million and Isaacs contributes nothing to expenses and upkeep.

We will definitely be keeping Mary in our prayers. We echo Love B. Scott’s sentiments on a new album for her, but we wonder will she have to pay Kendu alimony too. Two words of recommendation for you Mary, “File Bankruptcy!”

It is being reported that rapper and actor, DMX, is now in “grave condition,” following a drug overdose which triggered a heart attack last night.

It is being reported that rapper and actor, DMX, is now in “grave condition,” following a drug overdose which triggered a heart attack last night.

The fifty year old rapper was rushed to a White Plains, New York hospital, but the true state of his condition remains unknown as multiple reports are coming in that he is fighting for his life, or in a vegetative state after being declared brain dead. Neither his family or representatives has yet to release an official statement on his condition.

DMX has battled drug addiction and substance abuse most of his life. In 2019, he canceled four tour dates to check into a rehab facility, apologizing to his fans for the disappointment. In multiple interviews, and most notably on OWN’s Iyanla Vanzant: Fix My Life,” the effects of said abuse has been disastrous to his family and marred his career and personal life. Still, the love and support from both celebrities and fans has been overwhelming, with many taking to social media.

Missy Elliot posted, “Prayers for DMX” on her Instagram account; with other rappers like Swizz Beatz and Rick Ross following suit. The former posted a sunset over the ocean, and the latter posting “Prayers up #DMX” with a video to an Instagram Story.

Fans too have posted their well wishes, as well as their disbelief in his relapse: “Prayers to the real rough rider,” @bitchiwas999 posted with a picture of DMX at a concert, meanwhile @RasheedPanda tweeted, “The worst thing is that we all thought he had been sober this whole last year, he did songs and looked healthier and everything. Addiction ain’t no damn joke.”

As aforementioned this story is still unfolding. We will report back with new information as it becomes available and would like to send our own personal prayers up for DMX.

Grammy-nominated artist Keyshia Cole is announcing her retirement from music after her final upcoming album.

Grammy-nominated artist Keyshia Cole is announcing her retirement from music after her final upcoming album.

Keyshia made the announcement unexpectedly on Instagram when a fan stated she should feel like she is “sitting on top of the world” with the way her latest single, “I Don’t Want To Be In Love” has been received by fans, the hype around her recent “Versuz Battle” with fellow singer and rival, Ashanti,  and her upcoming album.

The songstress, surprisingly, replied “I’m retiring. “When questioned on the seriousness of her response, she doubled down and stated, “I’m not lying.” Keyshia’s fans initially thought her account was being hacked, however she confirmed again she was retiring, but promised one more album. “I’m already contracted to do so, I wouldn’t do that to @BMG ,myself, or my fans,” she said of not releasing a record. “But I’m gonna have to move at my pace with this one. #Album8.” She goes on to cite her children as her reason for retirement, stating she wants to take a step back and jokes about leaving music altogether. “#StimnyHitsAccount RETIREMENT SOUNDS GOOD [crying laughing emoji] this is funny! Hella! Just thought I’d join in on the fun. I’m serious about retirement… [crossed fingers emoji] but this is funny [crying laughing emoji].”

Fan reaction to Keyshia’s retirement announcement has bordered on the humorous side, with most questioning her others heckling her.

I know there’s a lot going on but what is Keyshia Cole exactly retiring from? Randomly putting out albums and the essence fest? Please don’t come for me. This is a question

Keyshia Cole said she's retiring from music to focus on her children. She must be rich rich.

Keyshia Cole’s forthcoming album will be her eighth one. Besides her music, the singer has been hailed as one of the music industry’s last true R&B artists. She is also known as a family and anti-drug advocate as she showcases her roller coaster relationship with her birth family, including her older sister Neffeteria “Neffe” Pugh and her mother, Francine “Frankie” Lons, well documented on multiple reality television series and talk shows.

WebLYFE Atlanta, Season 2, To Be Produced By “U Do TV!”

WebLYFE’s creator, casting director, producer, cast member and owner, Michael Jonvier, formerly known as “Hey Mikey,” has opted to switch to a new production company. WebLYFE Season 2 will now be produced and filmed by Atlanta based production company and new Roku Channel, U Do TV.

WebLYFE Atlanta was one of the latest additions to the growing genre of LGBT Web Reality Series.

However, the first season was riddled with production issues, onset and behind the scenes as various cast members and producers clashed with one another and production. Although many viewers enjoyed the series and the cast; even more noted the poor production quality of the episodes (editing, lighting, camera movement, audio, etc.), not seeing the full scope of the cast’s work, and an imbalanced story line primarily centered on two cast members that was pushed throughout the season. This is a far cry from the original balanced vision of an ensemble cast the show’s creator clearly expressed and expected.

WebLYFE’s creator, casting director, producer, cast member and owner, Michael Jonvier, formerly known as “Hey Mikey,” has opted to switch to a new production company. WebLYFE Season 2 will now be produced and filmed by Atlanta based production company and new Roku Channel, U Do TV.

Together with the CEO of U Do TV, Maurice Ravennah, Michael will co-executive produce the new season, in collaboration with his own new media company Michael Jonvier Media, LLC. Project Management Company, Forever Dope Management, headed by Ebony Shinelle, will assist with show production and operations, while Kontrol Magazine will act as a major sponsor. “We’ve worked with Michael for a decade, and with our two brands merging, this is the perfect marriage. WebLYFE has been a dream of his for years, even when he was intially naming it ‘Web Stars of Atlanta’ and we are happy to help however we are needed. We got his back!” Julian Lark, Editor-in-Chief and Publisher of Kontrol Magazine tells us.

Additionally coming on board are returning cast members Carl Levonzell, Lacie Doll, Freshie, and Larry Carter. “This show is my brainchild and I wanted a reality series that was balanced. Yes, you have the drama, but you need to also see people working through their issues, finding solutions, and for sure showcasing their work. I’m blessed to call some of the most creative minds in the city [Atlanta] my friends and colleagues. Season 2 is going to be my vision–what it should have been all along.” When asked where Michael stands with the former production, OutPour Media Productions LGBTQ, he simply states, “I wish them the best. My interaction with their executive producer, solely, taught me to research people thoroughly before working with them; and that you can never see your vision come to fruition in the hands of someone else. Nevertheless, I wish them the best.”

In the second season you will also see two new faces soon to be announced! Michael and Maurice both state they want well rounded people who have never been on a reality television with a story and work that will really make people take notice. “Atlanta is full of talented people, but we are looking for individuals who are making moves in their fields as well as have the personality and wherewithal to deal with reality television…We are excited to partner with Michael on this and are more than prepared to deliver an amazing second season.” Maurice adds.

Jordan Fisher Cast as “Bart Allen/Impulse” in The CW’s “The Flash!”

[VIDEO/EXTENDED TRAILER] In Case You Missed It! Signal 23 TV Debuts New Series, “About Us!”

[VIDEO] So Where She At? Mystikal’s (@ItsMystikal) Alleged Accomplice Says She Has Proof His Rape Accuser is Lying!